Apple considered other ways to measure a user’s heart using an ECG before launching the Apple Watch Series 4, including using an armband and wirelessly-connected electrodes.

In September 2018, Apple introduced the Apple Watch Series 4. The model’s main feature was its electrocardiogram (ECG) function, which allowed the wearer to monitor the electrical signals generated by their heart from their wrist.

While the feature has gone on to help save many lives, it appears that Apple’s implementation in the Apple Watch wasn’t the only way it was considering for the feature.

In a patent granted by the U.S. Patent and Trademark Office on Tuesday titled “Portable electrocardiogram device,” Apple explains how a cardiac monitoring device could be created in a few novel ways. One of those ways turns out to be practically what it used in the Apple Watch.

The way the electrocardiogram works is to have two points of contact with the user, at different positions of the body. The positions are usually selected so that the heart is between the two points.

In the first version, Apple suggests a “wearable device” with a housing that is in contact with the skin, and an antenna sticking out of it to be “capacitively coupled” to the body for the second electrical potential point. In the case of the existing Apple Watch, this takes the form of the sensor contacting the wrist, and the user holding a finger from the opposite hand on the Digital Crown.

The patent goes on to describe the use of a “metal moat” on the surface of an electrode, the grounding of outer and inner walls, an amplifier, and a “parasitic capacitance reduction unit” to correct the amplified results.

Two other embodiments are included in the patent, but they are for versions that perform the same task, but in quite different ways.

One alternative involves a wearable device accompanied by another unit. The wearable device would make capacitive contact with the user directly, much like the Apple Watch.

The second unit consists of an antenna that can be placed on a second location, which in images is illustrated by an armband. The secondary unit communicates with the wearable device to provide the extra ECG data from the second location. 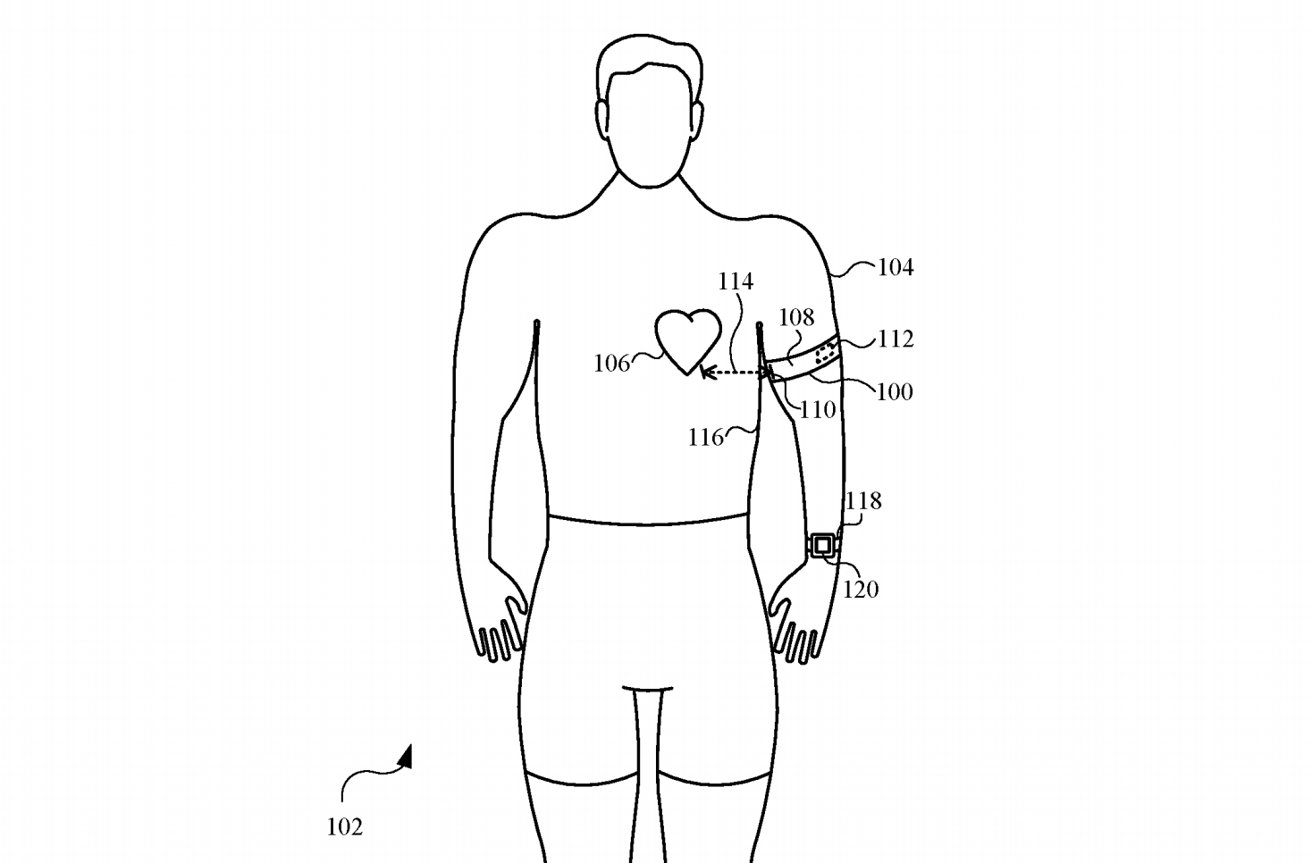 An armband could have aided ECG measurements for the Apple Watch.

While it could provide capacitive data, Apple instead suggested it could provide readings by performing the ECG over an “air gap.” This could be interpreted as having the armband inches away from the user’s heart and being able to detect the electrical signals from that distance.

The other alternative is a mix of the two techniques, with it largely consisting of the second with a wirelessly-connected antenna element connecting to an Apple Watch-like device. However, rather than just relying on monitoring the heart via an air gap, the antenna would be capacitively connected to the body.

It would be feasible that an armband could perform both air-gapped and capacitive measurements and beam the data back to the Apple Watch, so as to collect as much data as possible for the user.

The patent lists its inventors as Chia Chi Wu, Sheng-Yang Tsui, and Shu Yu Lin. It was originally filed on September 11, 2018, This date is 1 day before Apple introduced the Apple Watch Series 4 in its September special event for that year.

Apple files numerous patent applications on a weekly basis, but while the existence of a patent indicates areas of interest for Apple’s research and development teams, it doesn’t guarantee the idea will appear in a future product or service.

Apple has previously gained a patent for a “Seamlessly embedded heart rate monitor” in 2013, one that describes the use of sensors within metallic conductive portions of a device housing to measure the user’s heart. The patent offered that it could be a way to identify the user biometrically.